Nima Sensor did not provide any compensation or product for this review. This is based on our own experience with both the Gen 1 and Gen 2 versions of the gluten sensor and test capsules. Some links on this page are affiliate links, and using them to purchase a Nima or Capsule pack will provide us with a contribution at no cost to you.

Nima Sensor: What is it? 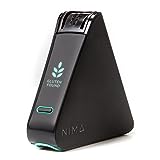 The Nima Sensor is a sensor that detects if gluten exists in a sample of food. The sensor is calibrated to detect gluten at or above 20 parts per million (ppm) – this is the limit at which the FDA will no longer allow a food to be labeled “gluten-free.” The Nima consists of three parts – the physical, triangle shaped Nima sensor, gluten test capsules, and the Nima smartphone app. Nima will also be introducing a peanut sensor and test capsule in 2018.

We wavered on if we should purchase a Nima sensor for over three months. Our son was diagnosed with Celiac disease and we were new to the gluten-free eating scene. We had previously eaten out regularly, but with the diagnosis, had all but stopped – we just weren’t sure what we could, or couldn’t eat, even if a restaurant had a gluten-free menu (many places still have a warning). We eventually decided to take the plunge, and were glad that we did. So glad, that a year later, we ordered a second Nima as well (for reasons explained later).

We had our ups and downs learning how to effectively use the device, and have some tips to get the most out of it. We decided to subscribe to a delivery of 12 capsules a month, which has worked well for us. Generally, we use about 4-6 a month, but when we go on trips we go through our supplies much faster.

We have had two very notable occasions – one in the USA, and one in Finland, where the Nima sensor has prevented us from eating a gluten-free labeled item, that in fact, turned out to be gluten-containing. It is very important to note that a Nima Sensor can not, and will not, tell you with 100% confidence that an entire dish is gluten free – and neither will any other scientific testing method – unless you literally test the entire dish (and thus, have nothing to eat). Instead, Nima provides you with a valuable data point that you can use to decide if you are going to eat something – but it does not replace asking questions, picking gluten friendly dishes, and using your instincts.

We recommend the Nima sensor for those with gluten allergies or Celiac, as long as it is not your only tool for determining if an item is safe for you to eat.

Nima Gen 2 arrives in a box with the Nima sensor, basic carry bag, and micro-USB cable for charging. The Gen 2 does not come with any test capsules – so be sure to order a box of them as well. Unboxing video coming soon!

The sensor is triangle shaped, and has a green rubber band along the bottom to help keep it stationary (which is important during testing). Also, Nima has a peanut sensor launching – and the color of this band is important if you need both in your household. The gluten sensor is color coded green on this band. The capsules also have a green band. For the peanut sensor, this is changed to purple based on current photos.

The front of the Nima contains a screen, hole for placing the test capsule, and a button that will start the test. The opposite side has a charging port for the USB cable. That’s it – simple and to the point. The Nima does include Bluetooth to link to your phone and an associated app, both of which are optional to use the device (which also makes it handy to use in any situation). The battery is supposed to last for up to 30 tests, and we have never had an issue and only charge monthly.

The hardware is built solidly. It has survived cargo pockets, backpacks, luggage, toddlers, and a couple of short drops from our bag onto the table.

The test capsules are designed well. The newer ones are more difficult to close than the previous version. We tested the “lock” feature which 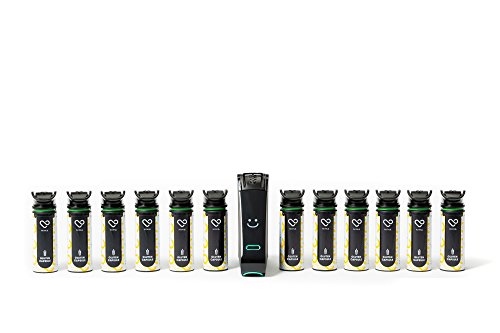 prevents the cap from being removed after you close it. It works well but could be defeated by an older child or adult – so dispose of them as soon as you can. We have taught our toddlers that the capsules are an adult-only item, and they generally are not inviting to play with – so we have not had any issues.

To test with the Nima, you first take a capsule out from an individually wrapped package. In the top of the capsule place a small, pea-sized sample of food (see our tips). After you have the food in the capsule, twist the top back on until it clicks into place and the rubber seal is no longer visible.

Load the capsule into the Nima, making sure that you hear the click and that the capsule is flush with the rest of the Nima. Once this is complete, press the button on the front of the Nima sensor off it goes! You’ll see what we have dubbed the “starburst” for 3-5 minutes, and hear a lot of clicking sounds. You may also notice the Nima vibrate and some occasions – move a little on the table. Don’t touch the sensor and move it during the test, but we have held it steady if needed without issues. Once the test is complete you will see one of three signs:

When we were visiting the USA, we took our son to Chuck E Cheese to celebrate his birthday. Unfortunately, they no longer served the baked-in-a-bag gluten free cheese pizza that came with an individually wrapped cutter. Chuck E Cheese was our go-to place for pizza, since the bag method basically ensured that cross-contamination was a non-issue. They now cook it alongside regular pizzas and cut it prior to delivery. On this trip, our GF pizza arrived on a regular pan, with paper, and cut. We tested along the cut lines (one of the best places to check for cross-contamination) and had a gluten result.

We had pleasant discussion with the manager, and discovered that they had just rinsed their gluten free cutter. It could have come into contact with a gluten pizza earlier. They offered to remake it (and not cut it) – and the second pizza came out perfect. We were on a cruise throughout Northern Europe in October 2017 and had an overnight stay in Oslo, Norway. On the second day, we decided to have lunch off the boat and ended up at a TGI Friday’s. Surprisingly, the Jack Daniels Burger was actually a gluten free menu item (if you replace the bun). Generally in Scandinavia gluten-free is easy to find anywhere – as a higher percentage of Scandinavians have celiac disease. We tested the burger and sauce (on the side) together – and it came back with a gluten found result. Usually, in this situation the sauce is to blame – and a second test of just the sauce revealed just that.

The server apologized, as they knew the sauce contained gluten, but the kitchen had accidentally placed it on the plate. Not a big deal, being on the on the side, but a great save.

Bottom Line: The Nima Sensor is a fantastic tool for anyone with celiac or non-celiac gluten sensitivity to have, as long as it is not your only source of information on if something is safe to eat. The Nima does not replace common sense, asking questions of your wait staff, and choosing celiac friendly menu items. The Nima can’t check all of your food. As long as you make the best sample possible, you’ll have a good data point.

Nima can be found online at http://nimasensor.com

We also helped out with a Nima Tested Dining Guide for Washington D.C. – check it out here!

Looking for a review of the Nima app? Coming soon!

Open
It's a lot different then the winters they're use

Open
Merry Christmas and Happy Holidays from your favor